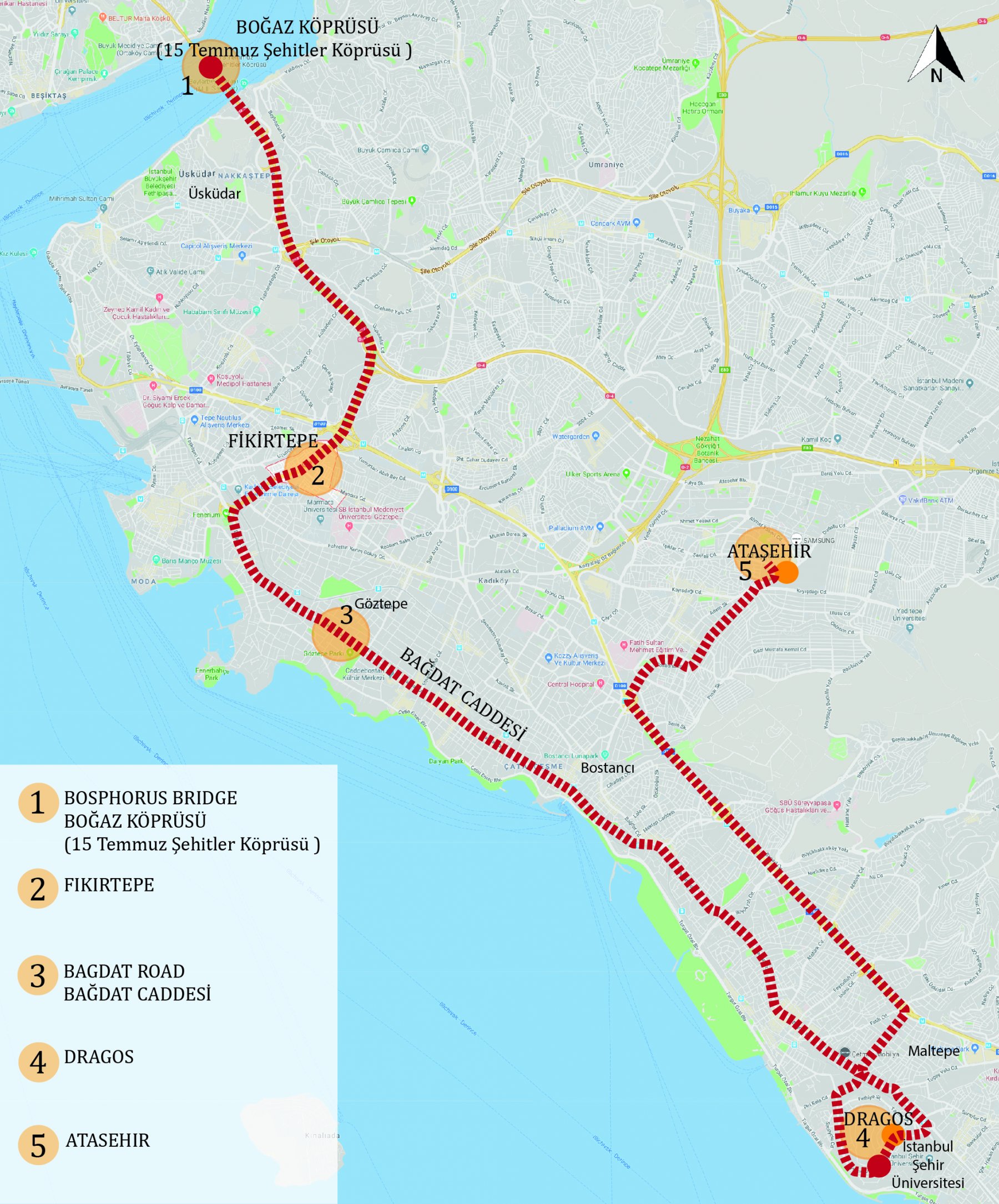 1 - Bosphorus Bridge (Bosphorus Bridge), officially known as the 15th Martyrs Bridge or the first bridge built to the Bosphorus, is the First Bridge, one of the three suspension bridges on the Bosphorus that connects the Black Sea and the Marmara Sea. The feet of the bridge are in Ortaköy on the European side and Beylerbeyi on the Anatolian side.

The Bosphorus Bridge, also known as the First Bridge, is the first bridge built on the Bosphorus and provides transportation between the two sides of the city along with the Fatih Sultan Mehmet Bridge and Yavuz Sultan Selim Bridge. Bridge construction started on February 20, 1970, on October 30, 1973 of the Republic of Turkey in honor of the 50th anniversary of the state ceremony was opened by President Fahri Koruturk. When it was completed, it was the fourth longest suspension bridge in the world.

The official name of the bridge on July 26, 2016, Turkey 2016, as amended July 15 to commemorate the Martyrs Bridge on the bridge of the citizens who lost their lives during the military coup.

2 –The first life (primitive life) in Fikirtepe was between 6.400-5.800 BC. The second settlement period hosted trade colonies in 1000 BC and was called Halkedon (Copper Country). The modern settlement took place in the 1700s. His name at the time was Idea Hill. The south of Fikirtepe was surrounded by sea and the north was surrounded by vineyards and gardens. In other words, it came to the fore as one of the rare regions that hosted both maritime and agricultural farmers. Fikirtepe, which is a low hill on both sides limited to valleys and protruding towards Kurbağalıdere, is thought to be connected to the sea in ancient times. The hunting lodge of Murad V, who ascended the throne in 1876, continued to be the only structure of Fikirtepe until the 1950s. Fikirtepe, which has been a scene of intense internal migration since 1950s and rapidly became a shanty district, became a mukhtar in Kadıköy district in 1965. The meadows, strawberries and okra fields used by the people of Istanbul as a promenade have been destroyed and replaced by thousands of slums. While some new neighborhoods were established in Kadıköy and its vicinity due to the new regulations after 1960, in 1965, in parallel with the abolition of the districts in the city, Kızıltoprak and Erenköy districts were also removed and neighborhoods were formed. Fikirtepe, which was formed on the same date with slums, is separated from Kızıltoprak as a separate neighborhood. Today, the D 100 motorway in the north, Kayışdağı in the south, Merdivenköy in the east, Kurbağalıdere-Boğaziçi Bridge Road surrounded by Fikirtepe is 1.300 meters away from Kalamış Bay and 2.000 meters away from Kadıköy Bay.

3 - The name of the Baghdad Road, the Ottoman Sultan IV. Murat is believed to have received from the "Baghdad Expedition" which ended in Baghdad and resulted in the victory of the Ottomans. Istanbul City, in today's words in the city plan published by the Istanbul Municipality in 1918 between Kurbağalıdere and Kızıltoprak as Baghdad Street. The ease of transportation not only made the environment livable, but also made it a popular place where many people from the surrounding area settled. In the 1950s, the arrival of a three-storey zoning environment gave green light to the construction of new ones as well as the old mansions. In subsequent years, the zoning status was increased to four or even five floors. Baghdad Street became famous in the 1960s and became a market place for Kadikoy people. The reason it became famous in the 1960s was the story of hundreds of years, the pavilions and the newly built apartments. The newly built apartments became special here and contributed greatly to the reputation of Cadde. In 1965, with the Law of Ownership, the process of "construction for floor" started in Kadıköy. In 1966, unfortunately, the tram was removed from Baghdad Street. In the 1970s, Baghdad Street quickly entered a period when the old mansions were demolished and new apartment buildings were built. In the 1980s, construction was in high demand. The beaches are filled. After that, the surrounding resort and cottage has lost its property. The 2000s were the years when Baghdad Street was known as "Cadde" and filled with cafes and restaurants. In 2010, as a precaution against the 1999 earthquake, Urban Transformation was considered and the buildings on the street were demolished one by one and new ones were built in time.

4- The known history of the region of Dragos Hill dates back to the 6th century. The region, which was one of the important settlements of the Anatolian side during the Byzantine and Ottoman periods, is today between Kartal and Maltepe district borders. The Dragos Stream, which lies on the slopes of the hill and is now the border between the two districts, is the first border point between the Seljuk Turks and Byzantium. With the treaty they signed in 1081, the Byzantine Emperor Alexios Kommenos and the Anatolian Seljuk Sultan Süleyman Şah set the Dragos Stream as the border between the two sides.

Tekel Cevizli Cigarette Factory, the construction of which launched in 1957 and officially opened in 1969, started production in 1967. In 1993, a modernization process was carried out including packaging and various tobacco preparation machines as well as cigarette manufacturing machines. After the privatization in 2008, the dysfunctional factory was allocated to Istanbul Şehir University. The University started its educational activities in 2017-2018 by preserving historical buildings and green spaces and making restorations under the supervision of the Conservation Boards. Materials that shed light on the history of the factory were preserved during the process.

5 - Ataşehir is a district on the Asian side of Istanbul. In 2008, it became one of the 39 districts of Istanbul by becoming a district by joining some neighborhoods from Kadıköy, Ümraniye and Üsküdar. It is surrounded by districts of Kadikoy in the southwest, Uskudar in the west, Umraniye in the north, Sancaktepe in the east and Maltepe in the southeast. The population of the district as of 2013 is 405.974 and has 17 neighborhoods. The concept of West part of the Atasehir has emerged when construction companies have realized housing and office projects in this region due to the suitability of the lands on the west part of the Atasehir. Buildings such as Varyap Meridian and Uphill Court are located in the western part of the district. Ülker Sports Arena, established in 2012, is also located in West part of the Ataşehir.